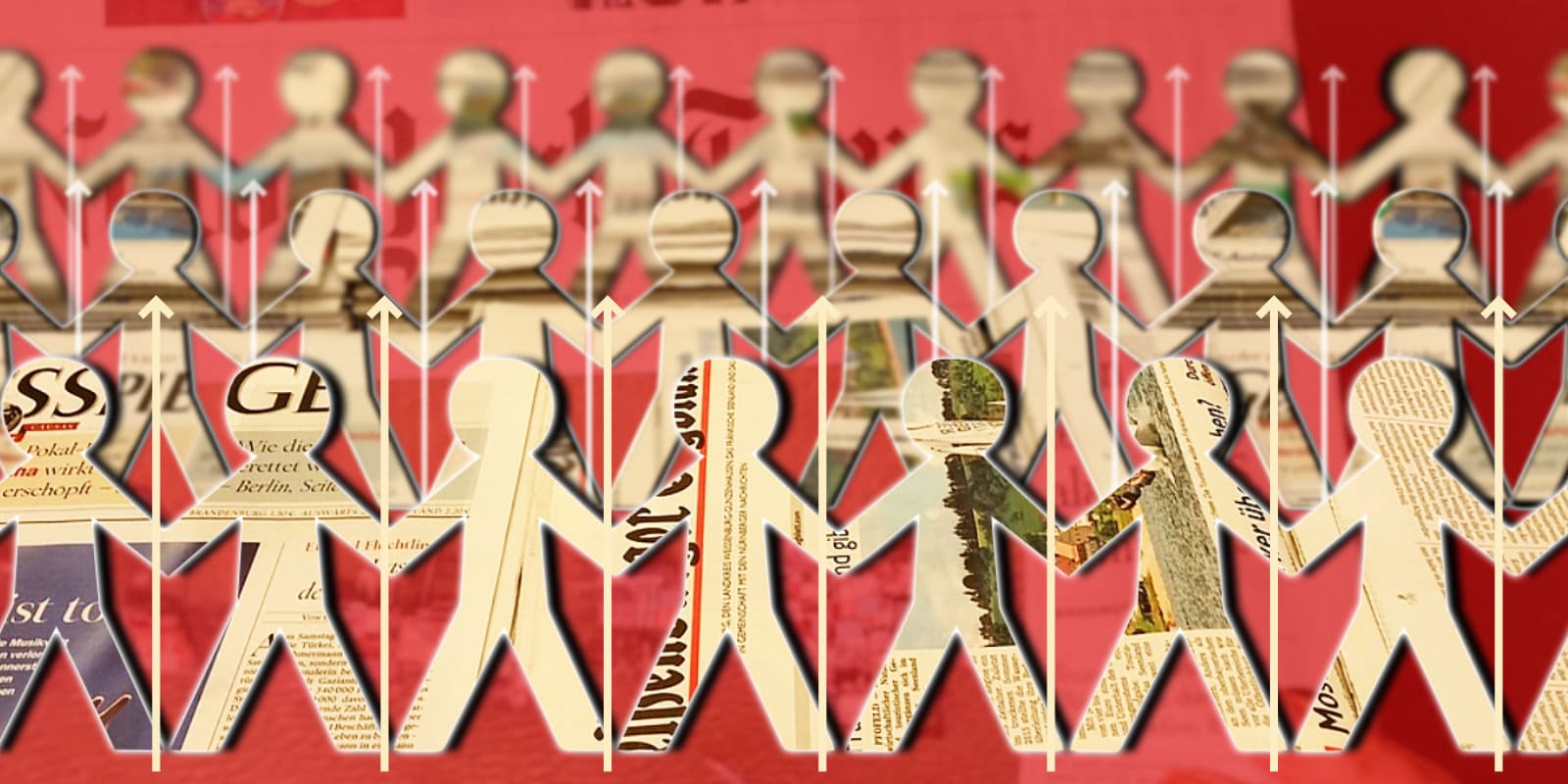 The Media: A Force for Activism

Objective, non-partisan reporting is a thing of the past. Complex topics are glossed over in a superficial manner in what is more like propaganda than in-depth, unbiased, investigative journalism. The mainstream media seems to be working harder to cover up the news than to report it.

bjective, non-partisan reporting is a thing of the past. Complex topics are glossed over in a superficial manner in what is more like propaganda than in-depth, unbiased, investigative journalism. The mainstream media seems to be working harder to cover up the news than to report it.

Immediately following a tragic event, we are told that the attack was not “terror related.” Then, we learn that the perpetrator had “mental health issues.” Later, we are told that the suspect had a wonderful smile and had recently become religiously devout. Eventually, we discover that he had accumulated vast amounts of weapons and explosives and had recently pursued a militia training program in Pakistan. But, we are reassured that none of this had anything to do with a newly found devotion to his faith. Rationalizations abound: specific religious minorities may experience feelings of discrimination and exclusion, which will require more psychological assessments and more specialized treatment and, predictably, more awareness raising and sensitivity training is recommended for the rest of us.

Captivating images and sensational headlines are used to hook the viewer or reader. The photograph of a child’s lifeless body washed up on a distant shore needs no words. It is evocative. It tugs at the heart. The report garnered international attention but neglected to mention that the child was travelling with his father who was on the way to Germany to take advantage of free health service. They were not refugees.

The media spins an altercation at a park in Ontario as racist and then rescinds the report when it becomes apparent that the facts don’t align with the narrative. It later became clear that the story really was racially motivated. The Somali immigrants involved were confrontational and violent. The media backs away from any story involving real racism perpetuated by anyone other than their intended target, the illusive ‘white supremacist.’ Terms like ‘extreme right,’ ‘racist’ and ‘bigot’ are thrown around to create the impression that there is a Nazi behind every tree or that hordes of hate-filled fascists are plotting a revolution yet, when an actual bomb-making operation is uncovered in Richmond Hill, Ontario the media reports that those involved were merely on the “cusp of radicalization.”

Much energy is consumed in word wizardry – inventing clever euphemisms to dazzle the mind. “Islamic extremists” are described simply as “gunmen.”  Nightly riots of migrants in France are reported as being carried out by “youth gangs.” Muslim gangs, in cities all across Europe, are labelled “Asian gangs.” When terrorists kill nearly three hundred Christians in Sri Lanka, the media call the victims “Easter Worshipers.” “Knife wounds” is the term used to describe the beheadings of two young Scandinavian women – misleading by mislabelling and manipulating language.

The media needs a sympathy story. Jihadi Jack was portrayed as a victim, as was Shamima Begum. Both had betrayed their country, turned away from decency and democracy and chose to join a supremacist death cult. A known terrorist, Omar Khadr, after being awarded millions of dollars, is invited on late night television as a celebrity.  Misleading at best…

The report neglected to mention that France had suffered hundreds of attacks on churches and cathedrals that same year.

It is very much about what we are not being told. While we watched in disbelief as Notre Dame Cathedral, one of the greatest architectural icons in the world, was still ablaze, the media had already announced that the fire was not an “act of terrorism.” Such reports are followed by interviews with so-called experts who invariably remind viewers to be vigilant of an outbreak of “xenophobia.” The report neglected to mention that France had suffered hundreds of attacks on churches and cathedrals that same year. Lack of pertinent information equals disinformation.

It is tempting to believe that the confidence of youth might enlighten the world’s leaders on what many believe to be a looming environmental disaster. Greta Thunberg’s crusade to save the world has brought her international attention and the mainstream media have adopted her as their climate mascot. Whatever she lacks in scientific knowledge she makes up for in crowd appeal. Besides, her television coverage boosts the ratings. How convenient!

Children, for reasons of safety, are rarely exposed on national television yet the CBC was only too happy to broadcast the “hijab hoax.” The story, as it turned out, was just that, a ‘story,’ as well as another example of the blatant exploitation of children. The obvious yet hidden agenda was to create the illusion that there is a Nazi behind every tree. No news is better than misleading news.

What was once a trusted news source and a watchdog over the government has become an instrument of that same government. In a symbiotic relationship the media is ‘bought and paid for’ by the government while politicians must pander to the media for image approval. Each must compromise whatever principles they might have had while locked in a dance of mutual appeasement. (On top of the 1.5 billion dollars the Canadian government gives to CBC, it has created a fund of $595 million for what it calls, “trusted sources.”)

Driven by identity politics and writing at the high school yearbook level, most new age media types are merely gossip columnists, obsessed with digging up dirt and character assassination. Seen through a social justice lens, everything begins with hearsay and innuendo and ends with labelling and name calling.

It has become trendy to label any diverging opinion as alt right or extreme right. Yet, everyone knows that control of the citizenry must be preceded by a takeover of the media, the one institution over any other that should be fighting to preserve its independence. Why is the mainstream media not mustering every defence against the government for pressuring internet companies to deplatform advocates of free speech?  Is it because this alternative news source is their principle competition? Real journalists are being banned from social media platforms for reporting the ugly truths that ‘accredited’ journalists are being paid to cover up. Embarrassing!

Among the most powerful players in the game, mainstream media companies have an existential interest in shaping the political landscape. The state broadcaster, in particular, would naturally favor whichever political entity most wants it to remain publicly funded.

More importantly, the mainstream media (notably the CBC) has taken sides. It has become a force for activism intent on promoting the leftist, globalist agenda. Its contribution to the cause is to paint anything traditional or conservative as old-fashioned, out of style. The nation state is a thing of the past. Patriotism has become synonymous with fascism. And a world without borders is the way forward.

Brainwashed by empty platitudes and prescribed slogans and living in an echo chamber of their own creation, virtue-signalling social justice worriers, posing as journalists, see it as their duty to influence public sentiment by spinning the politically correct narrative. Whether it’s the myth of multiculturalism or the pseudo-economics and false altruism of mass migration, they are working tirelessly to ensure ideological conformity. The new age media types are terrified of any sign of individuality. Given its own constant drum beat for ‘Diversity,’ it is revealing to see how, in typical hypocritical style, the mainstream media will stop at nothing to stifle anything resembling diversity of opinion. This clique, this cabal, this cult of conformity never tires of conflating religion with race yet is more than willing to call Canadians racists and bigots for making that distinction. How predictable! How progressive!

Obsessed with labelling anything not in line with their worldview as ‘hate speech,’ mainstream media is oblivious to the real hate…  Where was the press when York University students were told, “Back to the ovens, Jews”?  Where is the commentary on the Boycott, Divestment and Sanction (BDS) movement infiltrating the universities?  Where were the real journalists when Al-Quds Day speeches culminate in visceral hatred directed at Israel, the only democratic country in the Middle East?  Anti-Semitism is higher in Europe than it has been since WWII and it is, demonstrably, on the rise in Canada, yet it goes unmentioned in the media.

When stipulations reminiscent of ‘blasphemy laws’ were embedded in the government’s Motion M-103, the CBC, in its infinite wisdom, reported that it was nothing to worry about. Twenty million dollars have already been allocated toward the implementation of M-103 and paid for by taxpayers who, should they dare complain, will yet again be labelled ‘Islamophobe.’ Vicious!
No amount of scolding, lecturing, shaming or name-calling from these self-appointed arbiters of what we are and are not allowed to question or criticize will convince the public of anything other than what they have long suspected, that the mainstream media has lost its way.

It was never the intended role of the media to prop up cardboard characters on the political stage, nor serve as apologists for government actors and Charlatans. Nor is it theirs to hide or distort the facts nor ‘seek and destroy’ those who would have the facts revealed.  Theirs is not to silence or demonize dissenting voices. Theirs is to ask the tough questions and hold accountable the law maker as well as the law breaker – even the media itself. Theirs is to work to uncover the truth and shine a light on the politics of appeasement, nepotism, corruption and fraud and, in the spirit of decency and democracy, inform the people! Remember the people?

The Media is entrusted with a vital task in the defence of our greatest cultural achievement – the individual’s right to free expression. If it is true, as it appears almost everywhere to be, that the media has become complacent, compliant and neglectful and has abandoned its primary purpose, its raison d’être, then it should come as no surprise  when it is ignored or ridiculed or called out as being, among other things, “Fake.”

Dale Branscombe, a retired teacher, luthier, musician and songwriter, is concerned about the erosion of freedom of speech as well as the encroachment of Islam on every aspect of society. He had always been an advocate of the political left until it “taxied to the dark side.”