A power struggle of sorts, between a mother and daughter, plays out in this short story.

It’s one in the morning, way late for a school night, but I decide to leave that be. “Nothing much,” I say, because the book’s a piece of fluff, and anyway I’m not reading it. Joni frets if she knows I’m fretting, or at least she used to, so I keep something handy I can pretend to concentrate on. I miss the days I actually could concentrate, maybe get through a magazine article, but there you go.

Joni doesn’t care, she just wants to talk. “How was practice?” I ask her.

She slams herself into the other easy chair. She’s fully decked out tonight — Derk likes to snark that she could be “a crack ho turning tricks in a crypt,” missing the point that this is exactly the look she’s going for. The top she’s got on tonight gouges particularly low, so you can see the goat head and most of the androgynous body of Baphomet, the beast she’s recently had tattooed onto her left breast by Spike, her guy down at Tribal. The skin around the image is still red but not, I note, oozy. Maybe she’s using the ointment I gave her.

What’s going on here is that Joni wants everything to be communal, collective. She refuses to impose her will on the other girls, even though she’s the one who writes and sings all the songs. She got the musical thing from me (I named her after Joni Mitchell), and she got the fanatical fair-mindedness from me too, I’m afraid.

I ask her, “What name does Deanna like?” Deanna’s the drummer. She’s generally on the other side of any rift in the band.

“Carcass.” Joni fidgets with the thick metal ring that runs through her septum, in one nostril and out the other.

Joni’s got a lovely voice, but what she does for the band is a sort of guttural roar.

This is a big deal for Joni. It’s her chance to make a mark, make a statement about who she is as a creative individual. She’s done a demo on her laptop, and she’s been pushing hard to get this gig at an outdoor festival, which happens to be dry, so their being underage isn’t a problem. Derk would love the band to break up, or at least lose the gig (which they’re pretty sure to do if they go with the word “twat”), and of course I’d love it too if Joni would go back to viola in the school orchestra and start eating and sleeping and speaking to people again, but I’ll never help my daughter fail. Not ever. Derk can go to hell.

Which isn’t fair. He adores her, of course he does, and he’s scared (though he can’t possibly be as scared as I am), but what he doesn’t get is the innocence of it all. When Joni sings Death did me like a dog last night she could just as well be singing Jimmy kissed me on the lips last night. It’d mean the same thing to her, pretty much. She has no idea about these things, she can’t have or she wouldn’t be able to say the words. It’s art, it’s artifice. Gangbanged by the ghosts of what we’ve ruined — she’s a poet, is what she is.

“How’s your voice holding up?” I say.

This is a worry for me, a trivial enough one that I can say it out loud. Joni’s got a lovely voice, but what she does for the band is a sort of guttural roar. She has to sound like that or the band won’t be taken seriously as death metal — it’s incredible how fussy and elitist some of these little drips can be. My brother used to be able to say “cruisin’ for a bruisin’” with one burp, and that’s kind of what this is, belching more than singing. What will it do to her vocal cords?

She can see I’m still unsure. “Really, my voice is fine,” she says, and impromptu she gives me the first few bars of “Blue,” my favourite Joni Mitchell song.

It’s beautiful. It’s so beautiful I could burst, I could die, but I don’t. I don’t even cry. “Pretty Dead?” I say.

“For your band name. You’re all pretty, so Pretty Dead?”

“Oh. I suppose not. Okay, but you’re all good kids. Good and Dead?”

And then I do start to cry, and I have to come up with a reason. “Your grandma,” I say. “She’d have been so proud.” My mum died a year ago, in gentler times, back when Joni was still into plain old thrash metal and had one steady boyfriend and maybe three piercings in her face. Mum might have called it “a mercy,” a favourite expression of hers. As in, it’s a mercy you’re burping instead of singing so people can’t make out what you want to say to them. 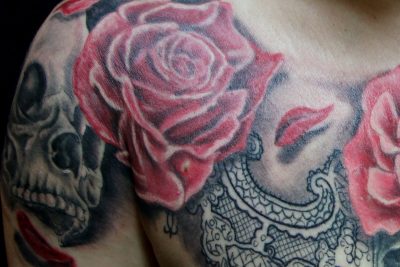 Joni stretches out and gives me a little shove with her bare foot, an act of great intimacy for her these days. “I miss her,” she says.

“Do I think she’s what, honey? Still around in some way?”

Joni shrugs. “Just everything. We need a band photo too, for the gig. Can I borrow your big camera?”

“Or would you maybe even shoot it for us?”

She halfway smiles. “We’re gonna do it on the church steps.”

“And we’ll have, like, crowns of thorns. Except barbed wire. Viv’s making them.”

“And we’ll be dry-humping our instruments.”

She peers at me again, still not convinced. “You’re okay with all this?”

“Metal,” from The End of Me by John Gould, © 2020. Reprinted by permission of Freehand Books.

John Gould is the author of The End of Me – a collection of 56 sudden stories about mortality – and of two previous collections in the same form, including Kilter, a finalist for the Giller prize. A teacher, editor and arts administrator, Gould has also written a novel, Seven Good Reasons Not to Be Good, and published fiction in periodicals across Canada and abroad.